It’s Thursday already, friends! I typically try to post on Wednesdays and Fridays, but with the whirlwind of Jade’s 1st birthday and party this past weekend, all my focus has been on her, her party, and editing all the hundreds of photos I took! No, don’t worry, I’m not sharing all the hundreds of photos with you. Only a select handful. And, of course, maybe one of Jade in her pretty party dress and crown thrown in there, too. 😉 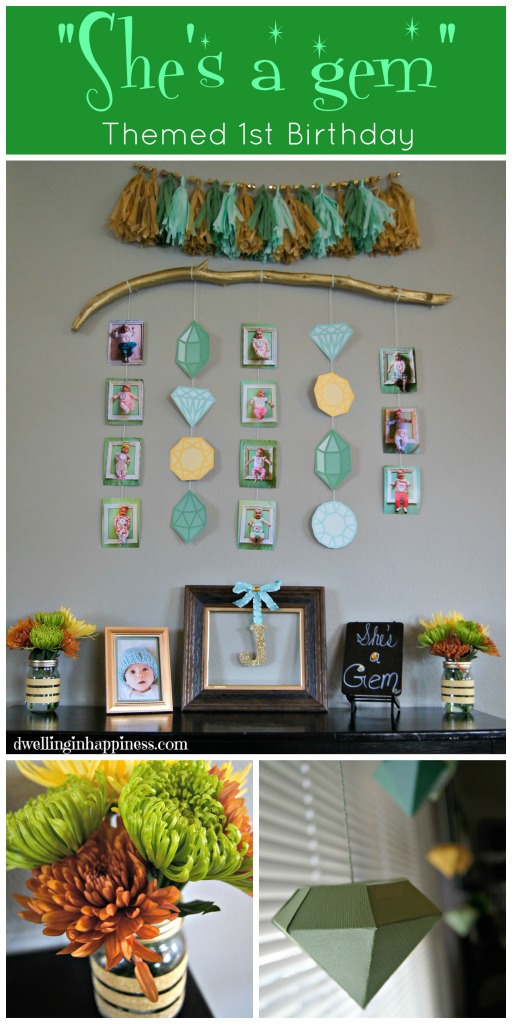 My sweet precious Jade turned one year old this last Monday, November 3rd. I STILL can’t believe my baby is 1!! On her birthday, I shared 5 Things I’ve Learned My 1st “Mom-Year,” which was fun to finally get all my thoughts out on “paper.”  I know there will be many more things I’ll learn this next year and chapter of Motherhood, and I’ll be sure to share them again one year from now! 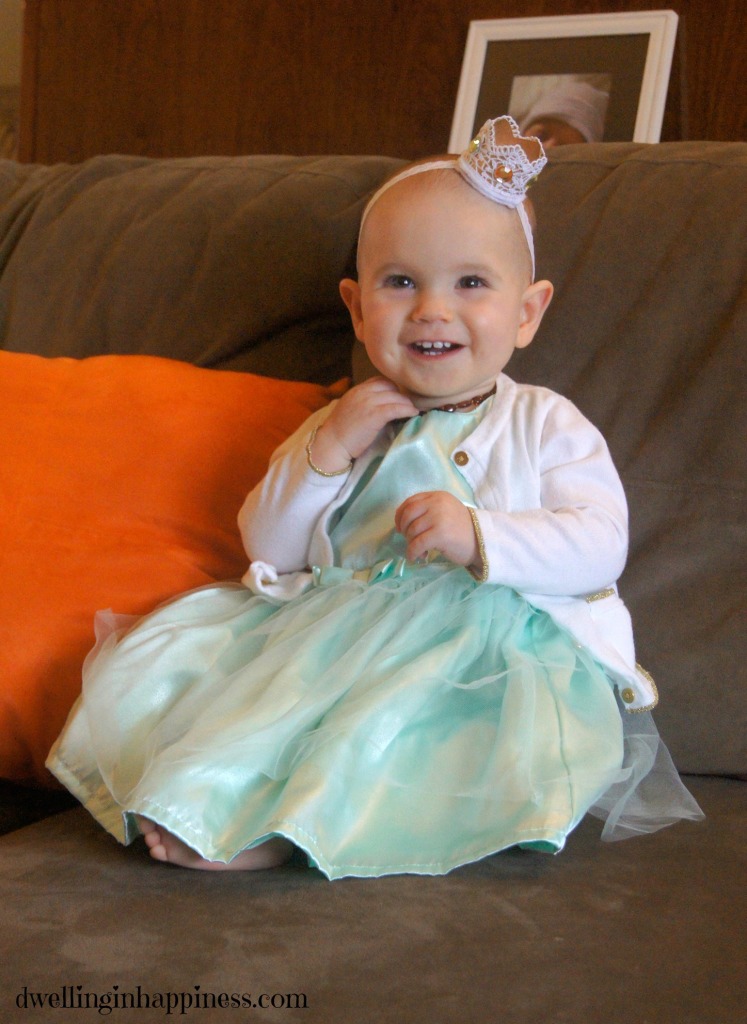 This past Sunday, we threw Jade’s 1st birthday party. It was a BLAST!!! We loved seeing her so excited to eat her cake and open presents. She may have been more interested in the tissue paper and bows than her actual new toys, but she’s coming around now. 😉

Jade’s name means “precious gem/jewel;” thus, our “She’s a Gem” theme was born. It was perfectly fitting! For colors, I wanted to use a “jade” green. Since her birthstone is Topaz, I used yellow as well and lots of gold (of course!). I also threw in some emerald green too, just because I liked the look of them all together.

For our invites, David and I made them in Photoshop and had them printed so we could personalize them how we wanted. 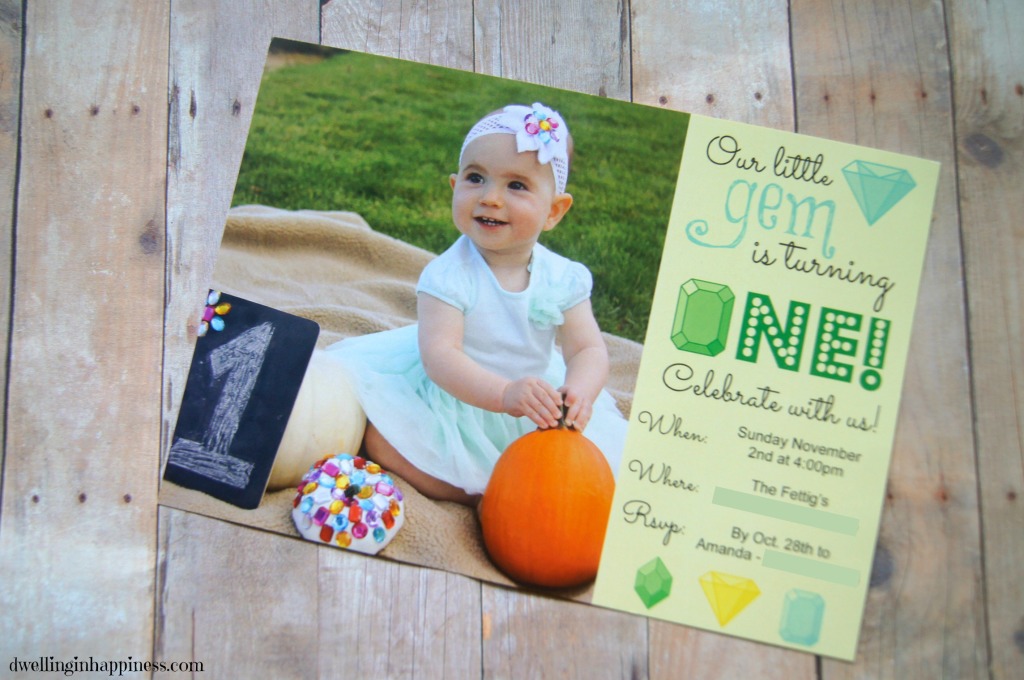 My sister and brother-in-law are photographers, so I had them take a seriously cute photo for the invitation! (They also did her cake smash photos! If you want to see more, you can visit their photography blog, LoveBugPhotography!) 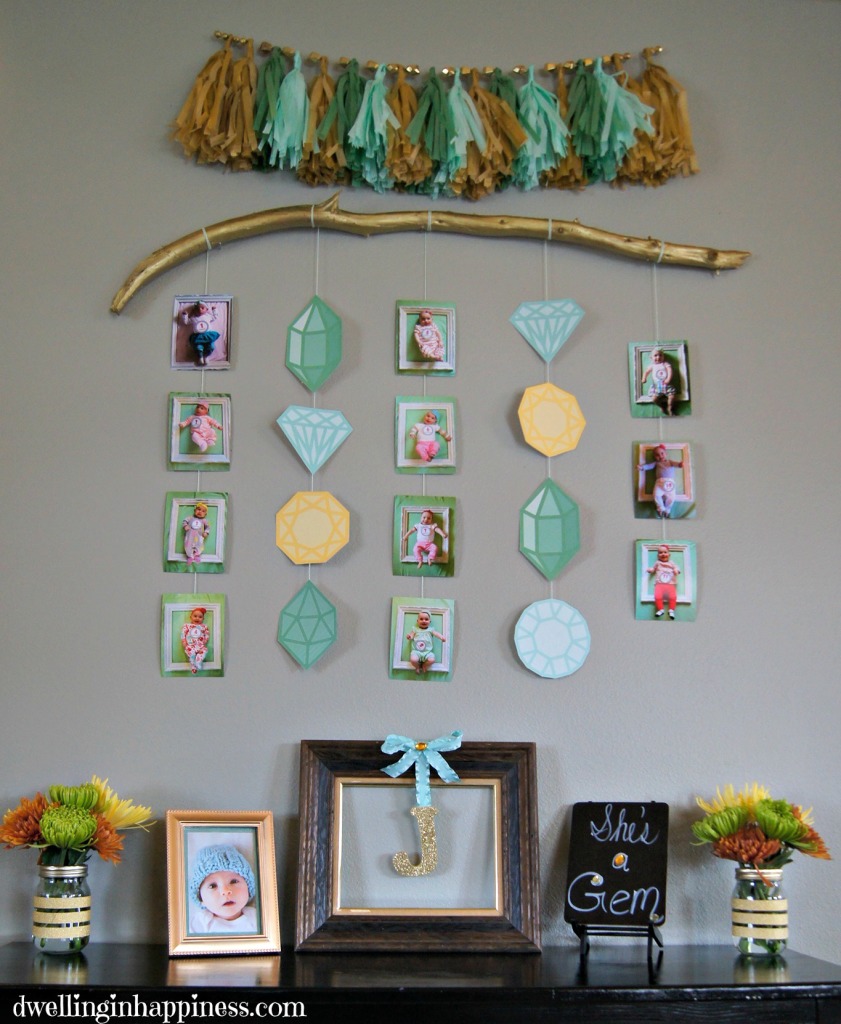 This wall was by far my favorite part of the party decor. I wanted to display her monthly photos I’ve taken, but wasn’t sure how to display them. 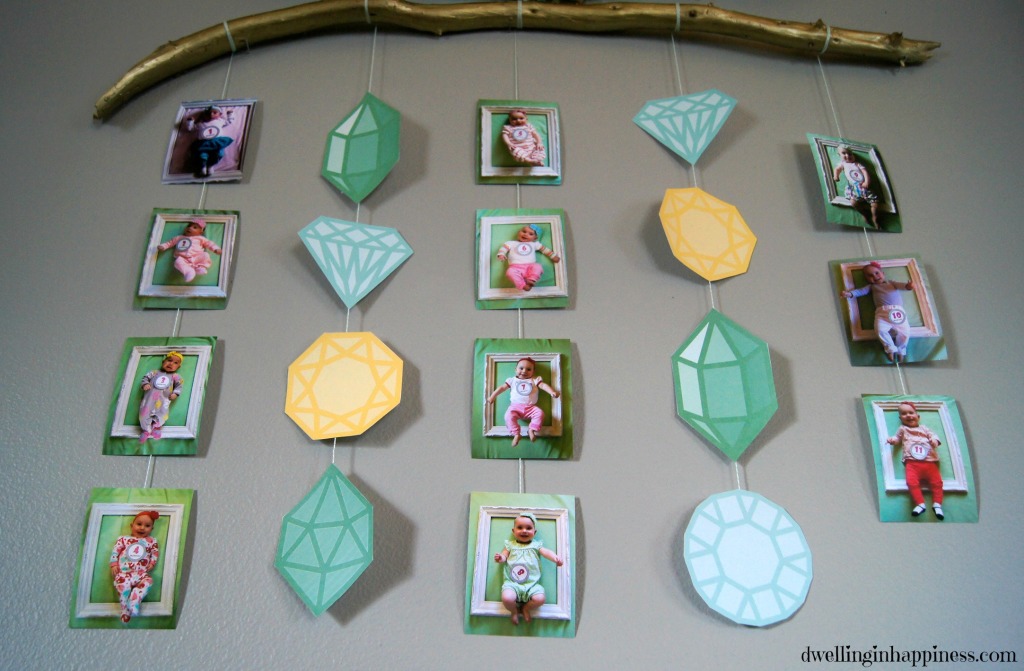 I had this large stick out behind our house that I’ve been keeping, thinking I’d figure out something to do with it. I thought painting it gold and hanging the pictures from it might look neat, so I gave it a shot! I love the outcome; totally a unique way to show off her pictures! I also found these gem printouts here, and we changed the colors on them so they’d match her color scheme. We also enlarged them, and they worked perfectly hanging next to the pictures! 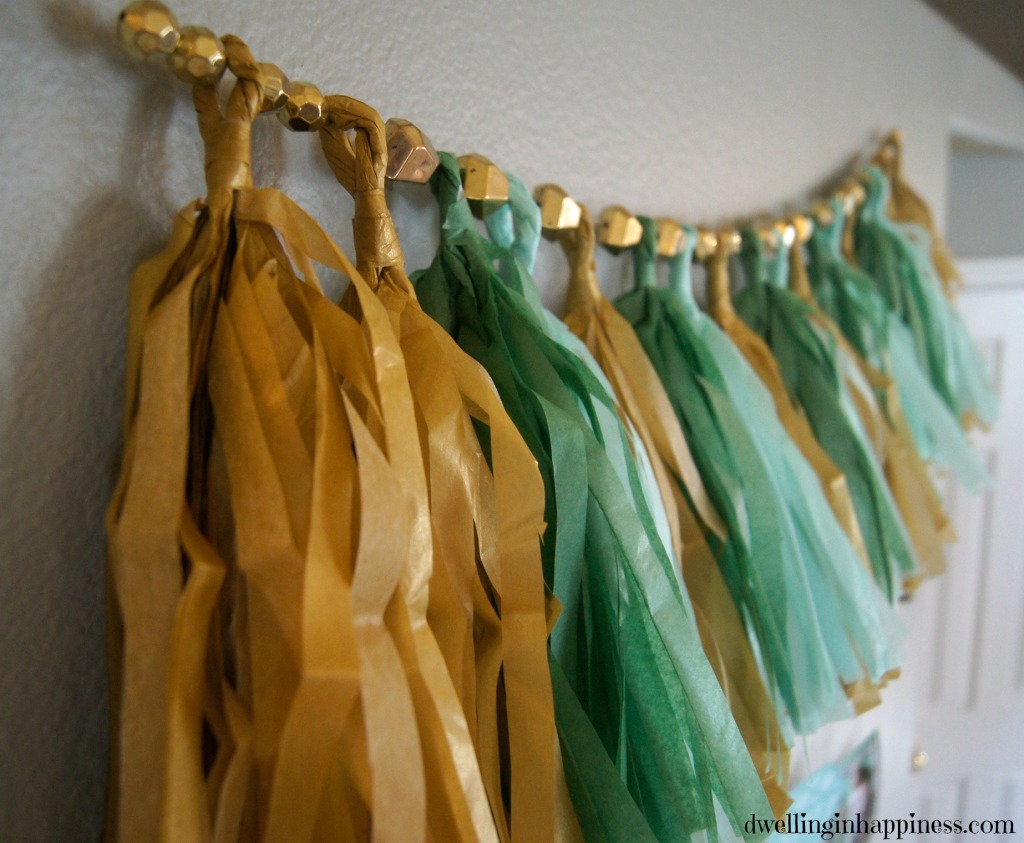 I knew I wanted a tassel garland, but I didn’t realize how much work it is! Totally worth it though. I also found these gold geometrical beads on clearance at Joann’s for $.99, and put one between each tassel. They were the perfect touch! 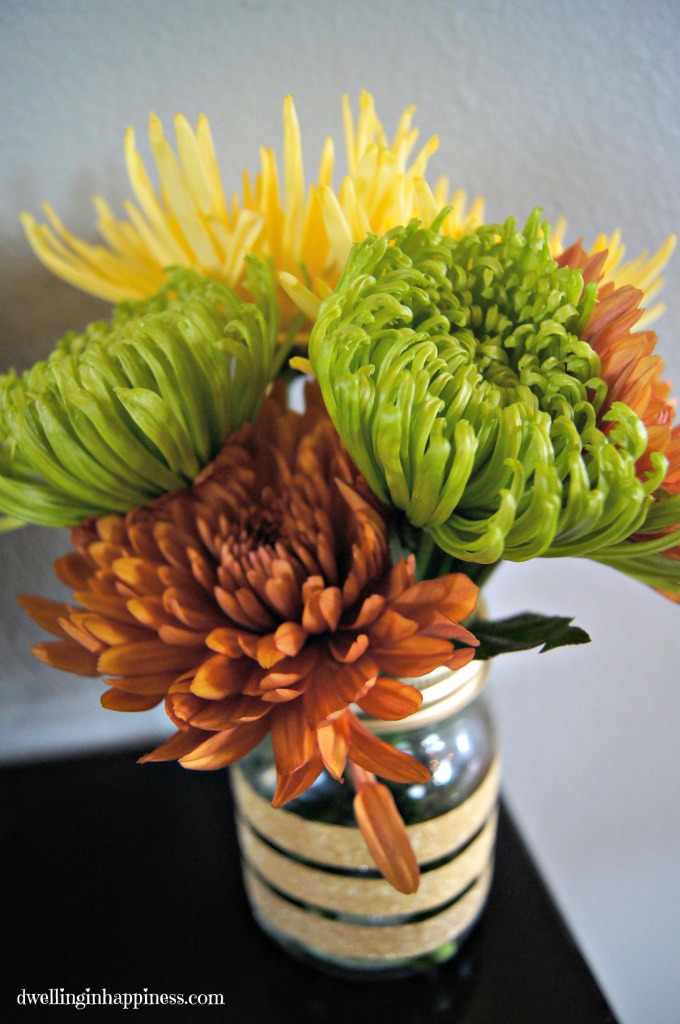 I found these gorgeous spider mums in similar theme colors, and added some sparkly gold washi tape to the mason jars to pretty them up a tad. 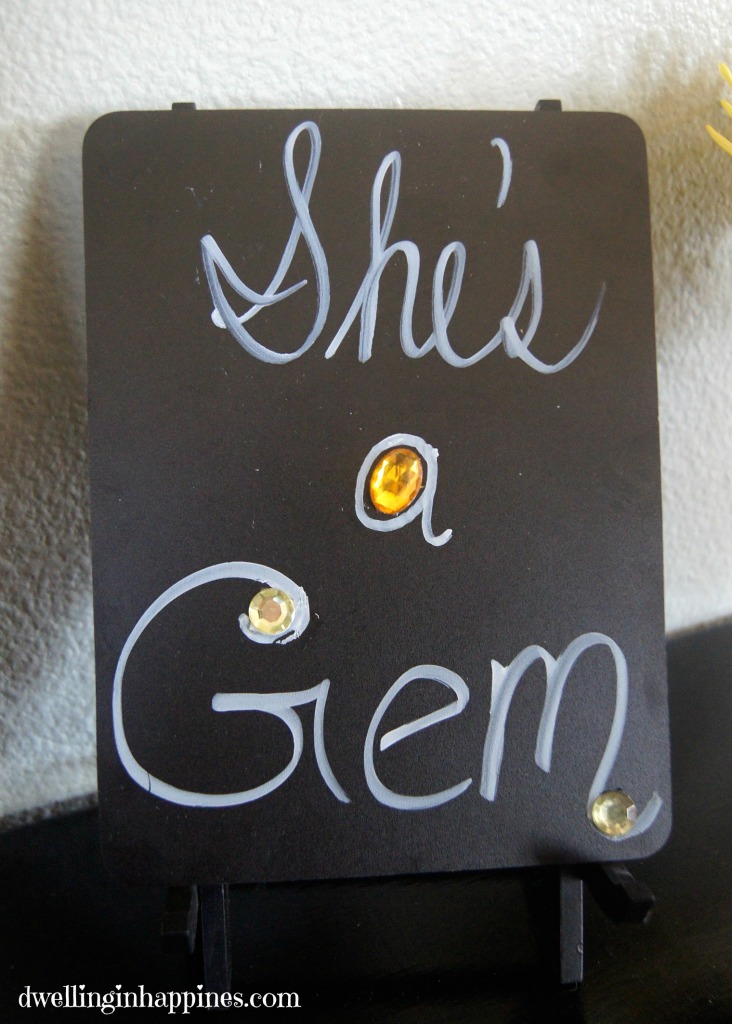 This little chalkboard was perfect to write “she’s a gem” on, and I added a few gems to glam it up some more. 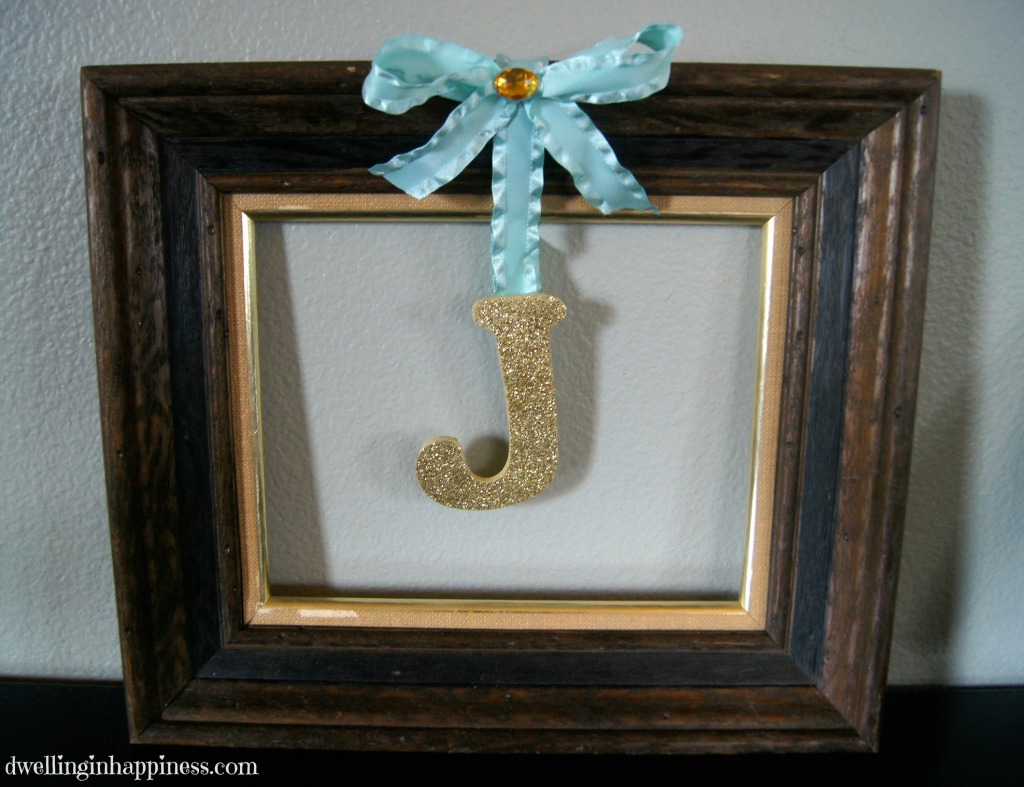 I found this glittery gold “J” at Joann’s too, and used some pretty Jade ribbon and a gem to attach it to a frame I already had. 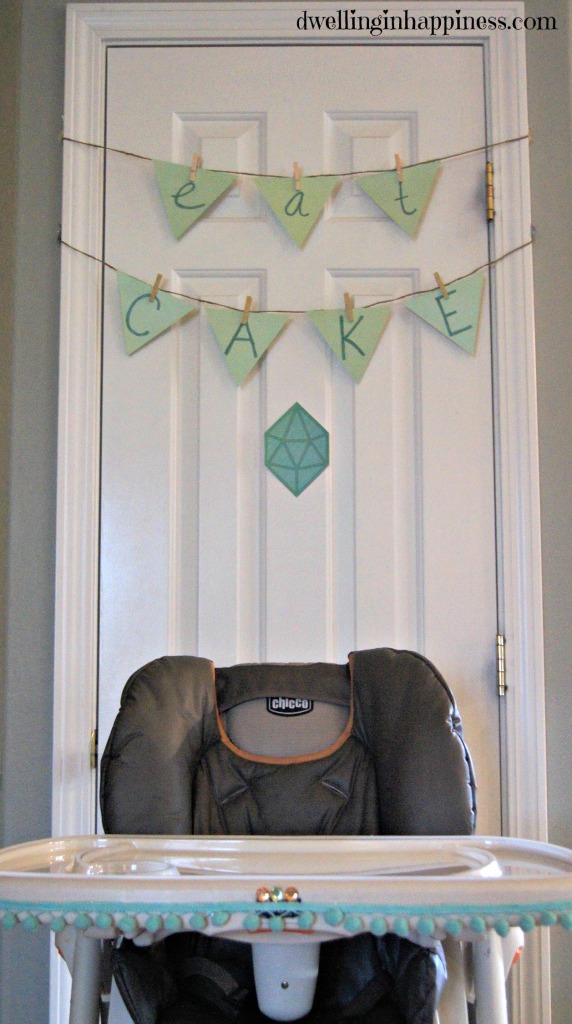 I made a cute “Eat cake” banner for over her high chair for the much anticipated cake smash. I also added some pom pom trim I found to the tray, to make it a little bit cuter. 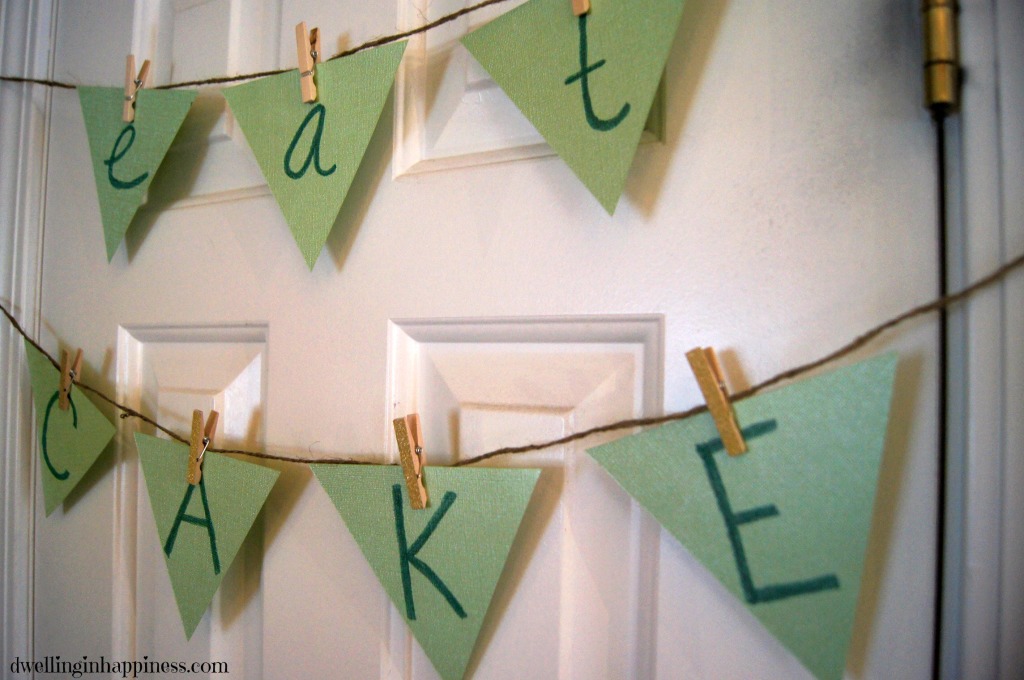 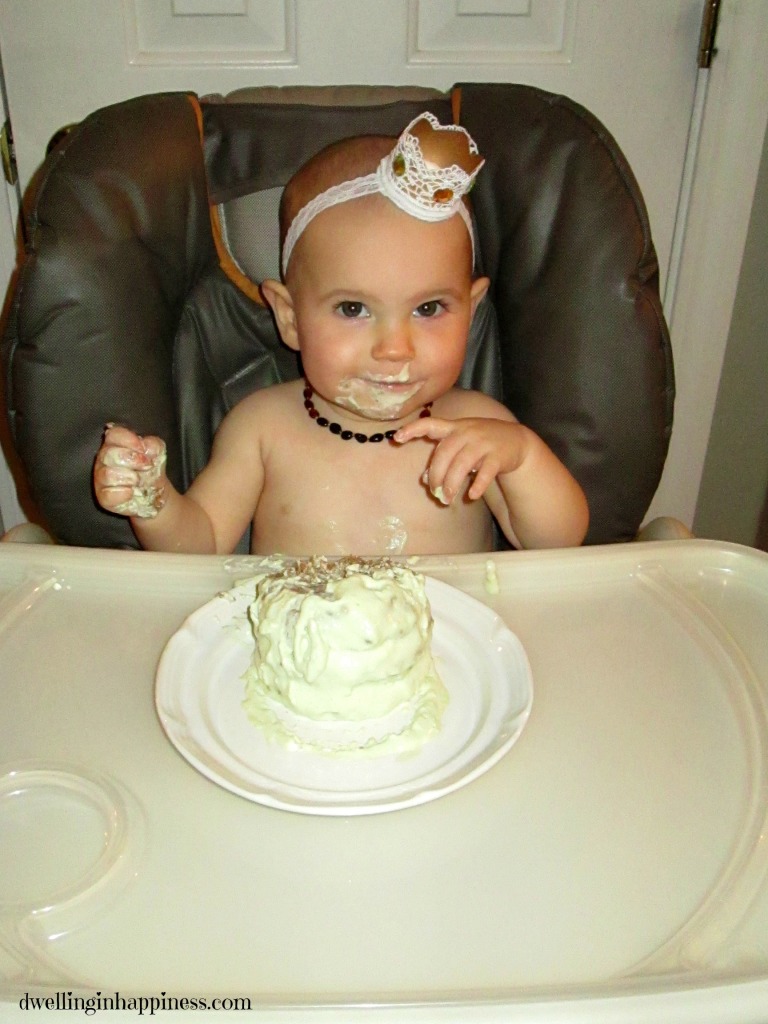 Okay, had to throw a cake-eating action shot in there! 🙂 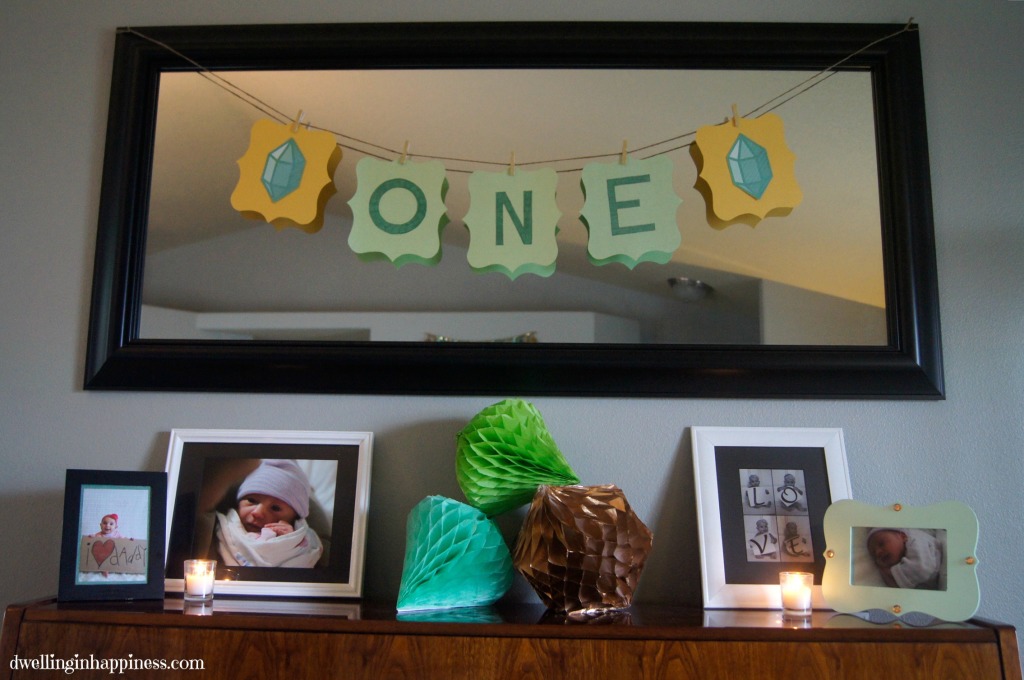 I had lots of baby pictures of Jade’s year set out for people to see. I made more work for myself than I probably needed to, but for the banner, I just drew and used a green Sharpie to color in the letters. I need myself one of those fancy cutting machines soon! 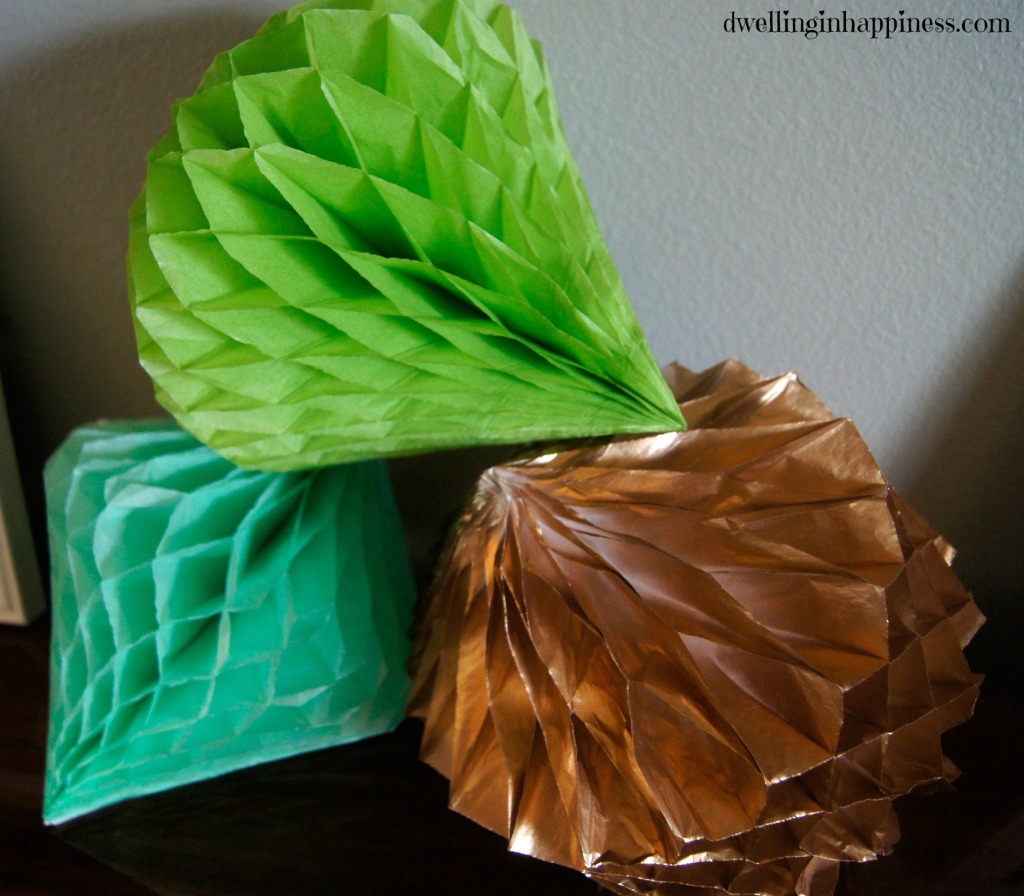 These were round honeycomb tissue balls that I found at Target. I cut them to look more like gems. The gold one was white, and I used my handy dandy gold metallic spray paint to give it more life! I also used these as props in Jade’s cake smash photo shoot. 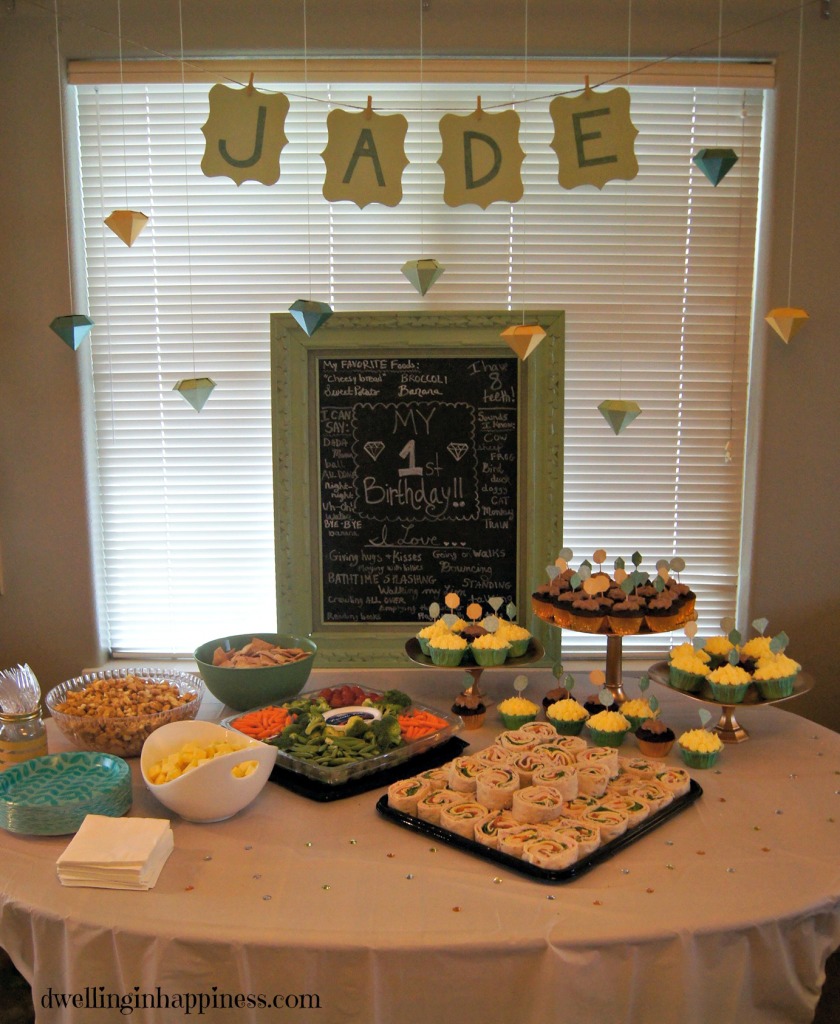 (A window is not the best place to put a table for pictures!) 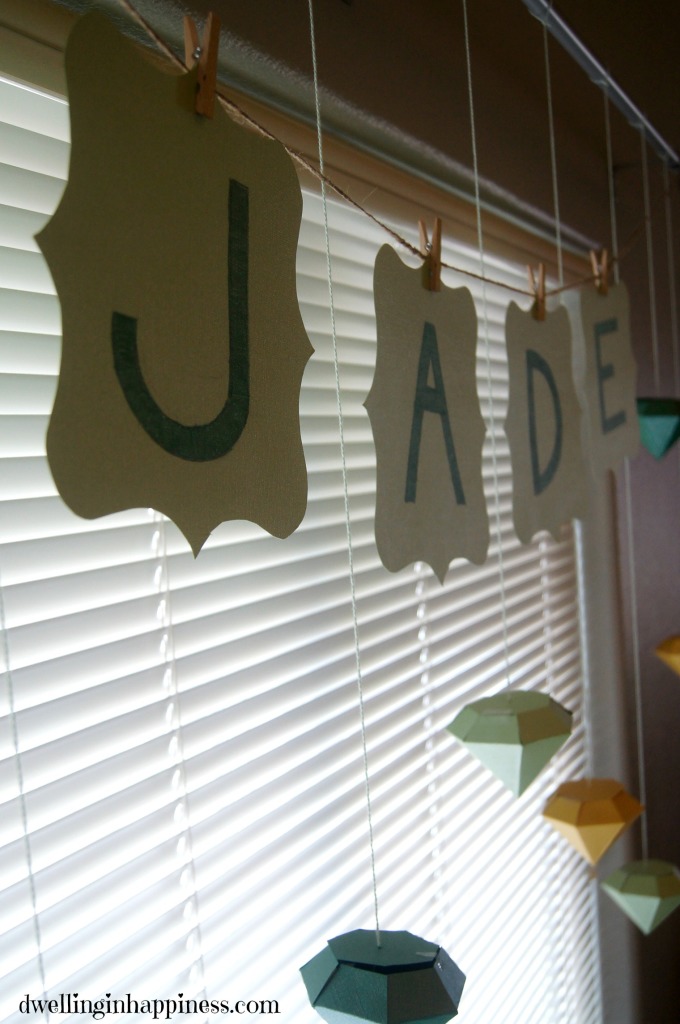 Like the “ONE” banner, I also just free-handed this one. Apparently I like to think I have unlimited time on my hands. 😉 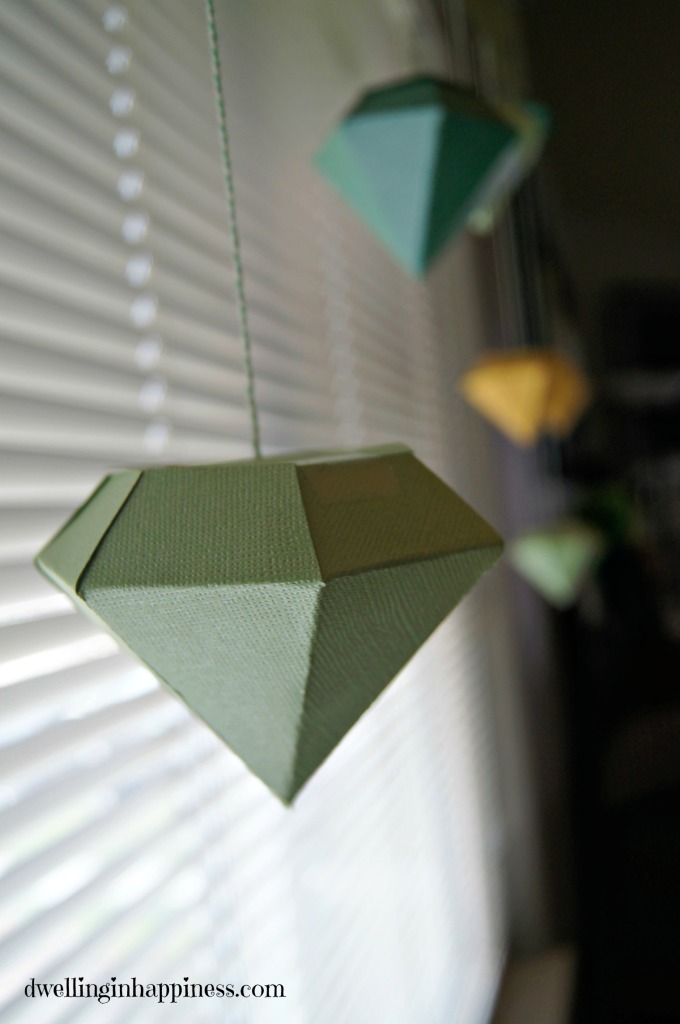 I LOVED these hanging 3D gems I made to hang in the window! I got the tutorial and printout here. They can also be mini pinatas, but I decided just to use pretty “gemstone” colored paper instead of using tissue paper. Also time consuming; but SO cute! 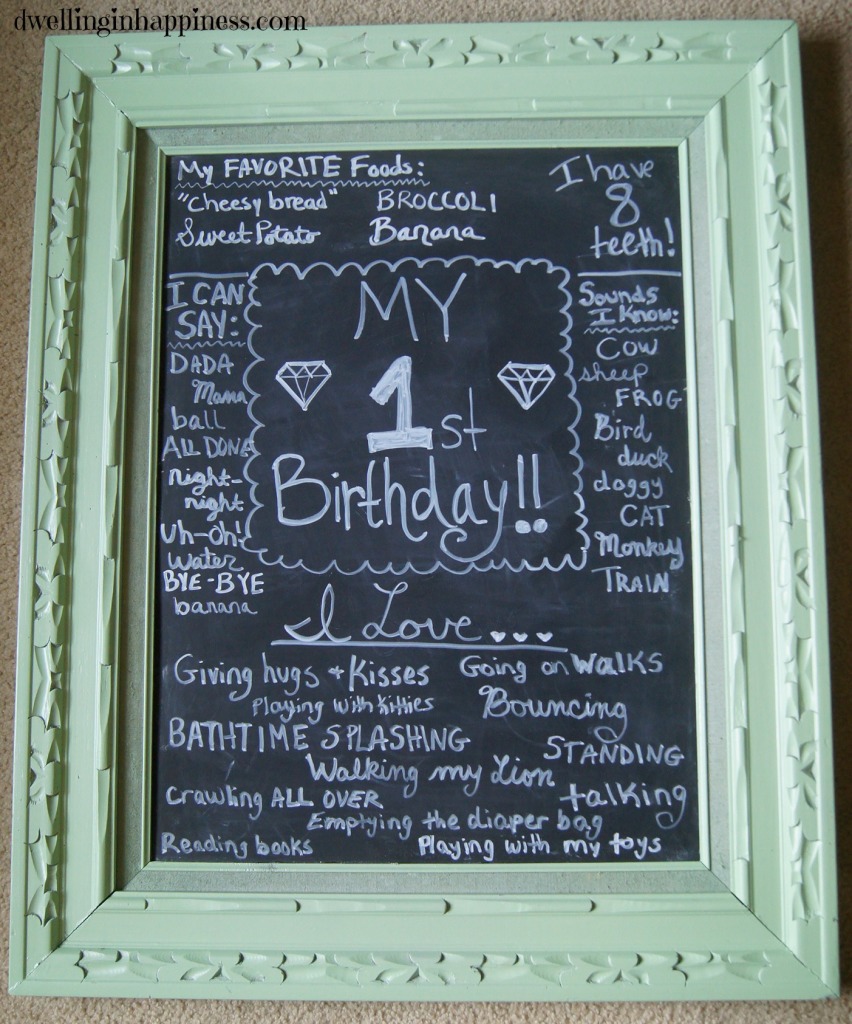 I had seen a lot of 1st birthday “About me” type of chalkboards on Etsy you can have printed, but I already had this huge chalkboard I made Jade that I wanted to incorporate. It’s already the right color! So, I bought a chalk pen and made one myself. I love how it displays everything about her in one place. 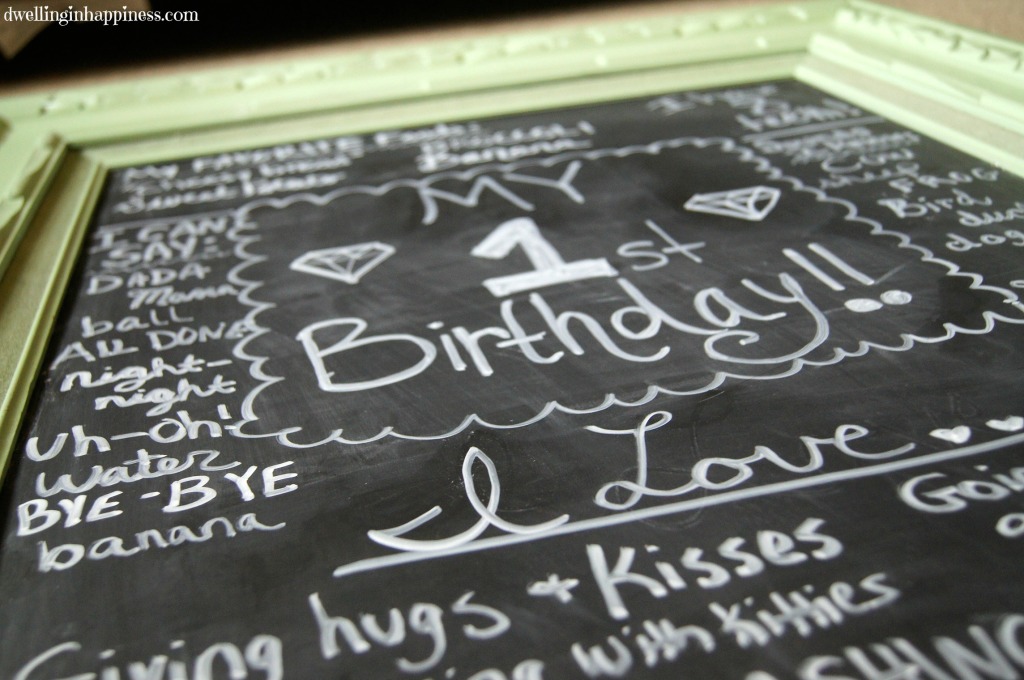 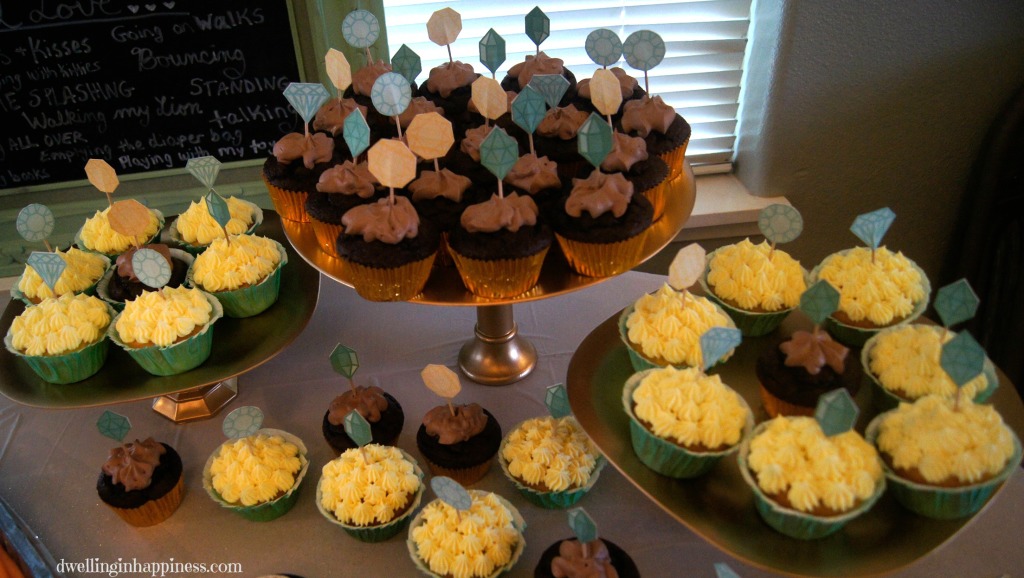 My mother-in-law is an amazing cupcake baker, and made these beautiful and delicious cupcakes! I also made these pretty gold cake plates, which you can get the tutorial for here. Don’t they look pretty holding the cupcakes? 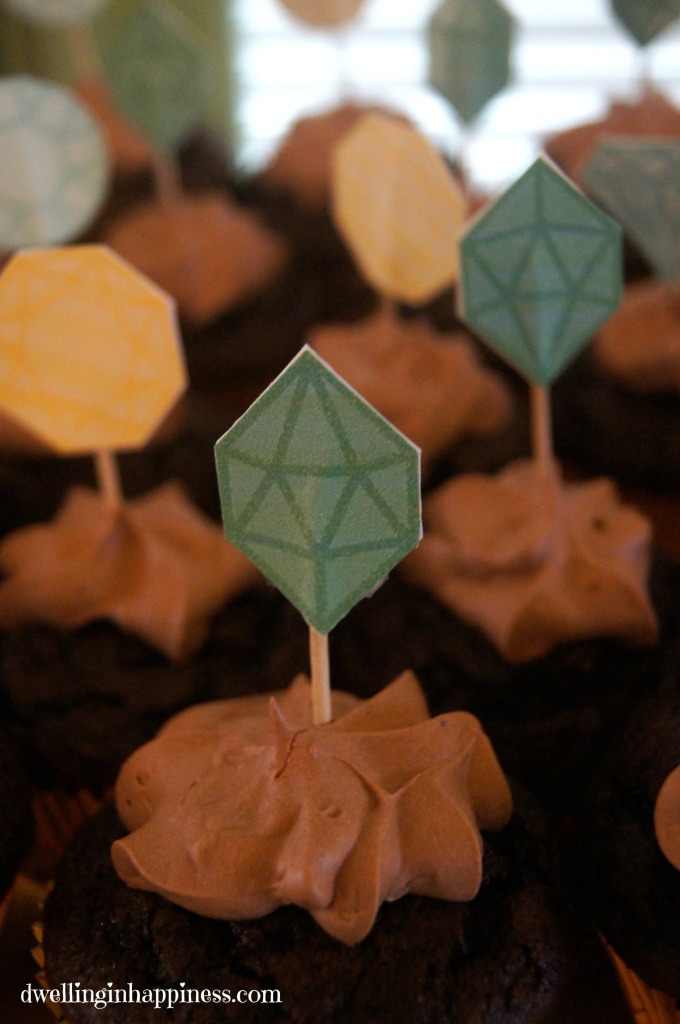 Seriously the BEST cupcakes ever. I used the same template for the gems as I did for the photo wall, but just made them a lot smaller to be cupcake toppers. 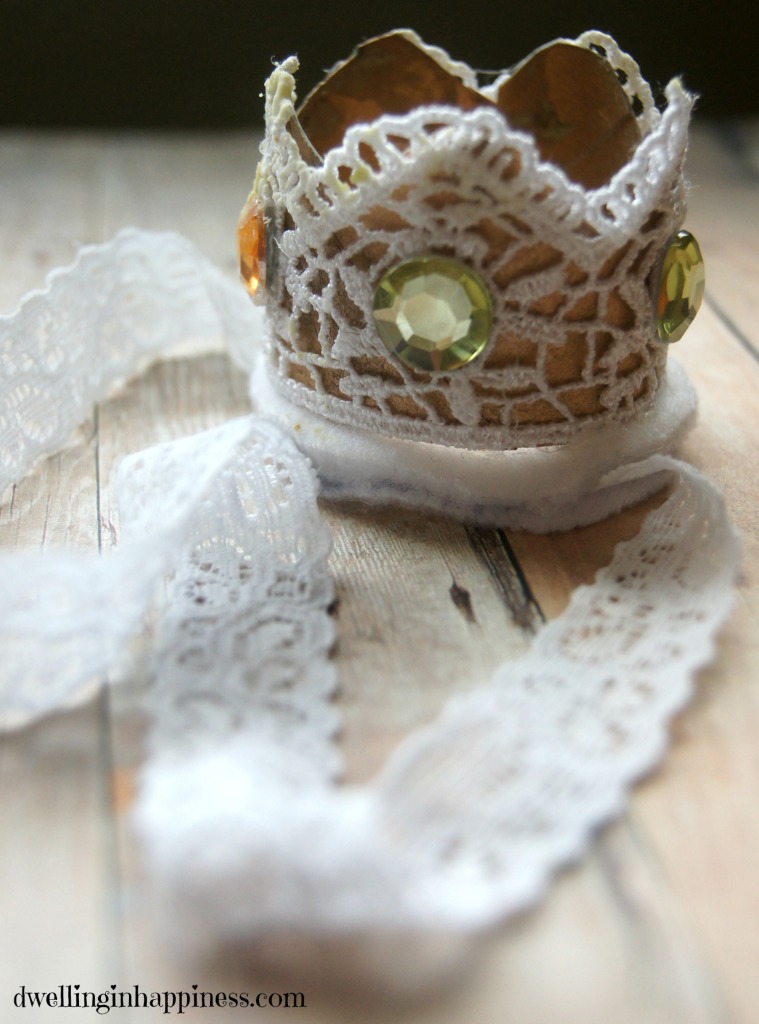 I thought it’d be fun to make her a little crown headband, and it turned out WAY adorable!! Don’t mind the cake all over it, of course she remembered it was on her head during her cake smash. I now know to take a picture of it BEFORE she wears it!

I loved every little detail of her party and how it all came together. I know that she could care less and didn’t even notice, but I will always have those pictures of everything to remember it by! Jim Gaffigan, a hilarious comedian, describes a 1st birthday party perfectly in one of his books: “Except for the photos, it really doesn’t matter if a baby is even at their first birthday party. They wouldn’t even notice if you didn’t throw them a party at all. You are the one that needs the party. The baby obviously has no friends yet, so the guest list is all your friends you haven’t seen for a year. And since your friends are the guests, they will obviously need good food, good drinks, and music, and suddenly you have the recipe for a raging bash and you take the pictures of your baby in front of the cake, put them to bed, and carry on like, well, like you don’t have a baby” (from Jim Gaffigan’s book Dad is Fat).

So, it didn’t exactly happen like that, but he sure does have a point! 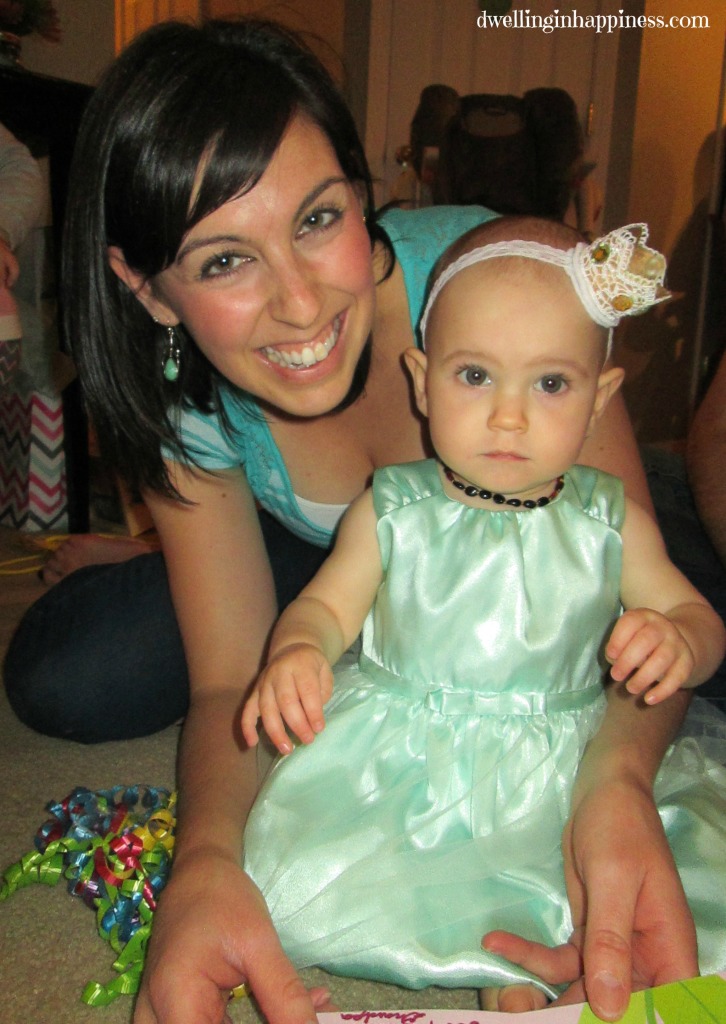 I just love my sweet little girl! And, of course, I have to add in a few more of Jade’s cake smash photo shoot. 🙂

I have a whole year to start planning her second birthday! 🙂 Have a great day, friends!

Have you hosted any birthday parties lately? What themes did you choose?

I link up at these fun parties!

But he knows the way that I take; when he has tested me, I will come forth as gold. My feet have closely followed his steps; I have kept to his way without turning aside.
Job 23:10-11
DailyVerses.net