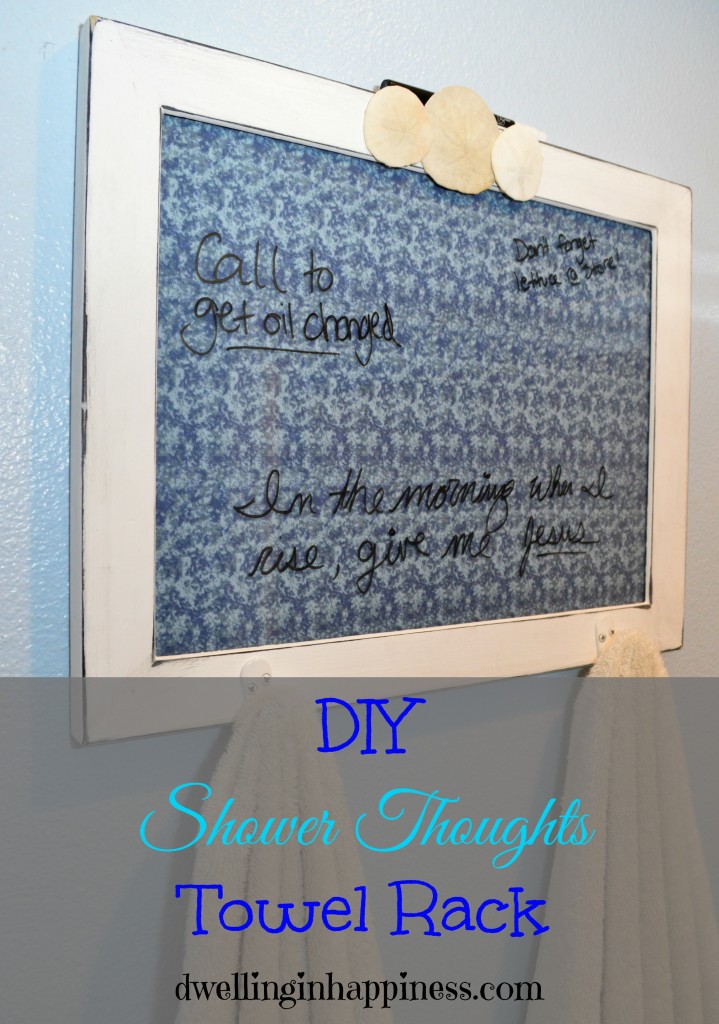 The weekend is upon us. Yay! Do you have any fun plans? We’ve had some crazy thunderstorm activity the past few days, and thankfully that has caused it to cool down a little. Sweet relief!

So, I don’t know about you, but a lot of times when I’m in the shower, I’m thinking of all the “to-do’s” for the day. Sometimes I’m thinking of things I need to do in weeks coming up, things I need to remember to get at the store, or what the heck to get David for Christmas and his birthday (which fortunately is still 4 months away!). By the time I  get out of the shower, dry my hair, and get ready for the day, I’ve basically forgotten all I’ve thought about whilst showering. Super annoying!

I came up with a way to not only help me remember things I thought about while showering, but also to move our towels closer to the shower. If I forget to grab my towel from the hook behind the door, then I have to quickly run from the shower to the door and back at lightening speed to make sure that I don’t drip everywhere, and more importantly, don’t get freezing cold.

I accomplished these tasks by creating a pretty “shower thoughts” whiteboard-towel-holder-in-one. I think it turned out super cute, too! And so easy. 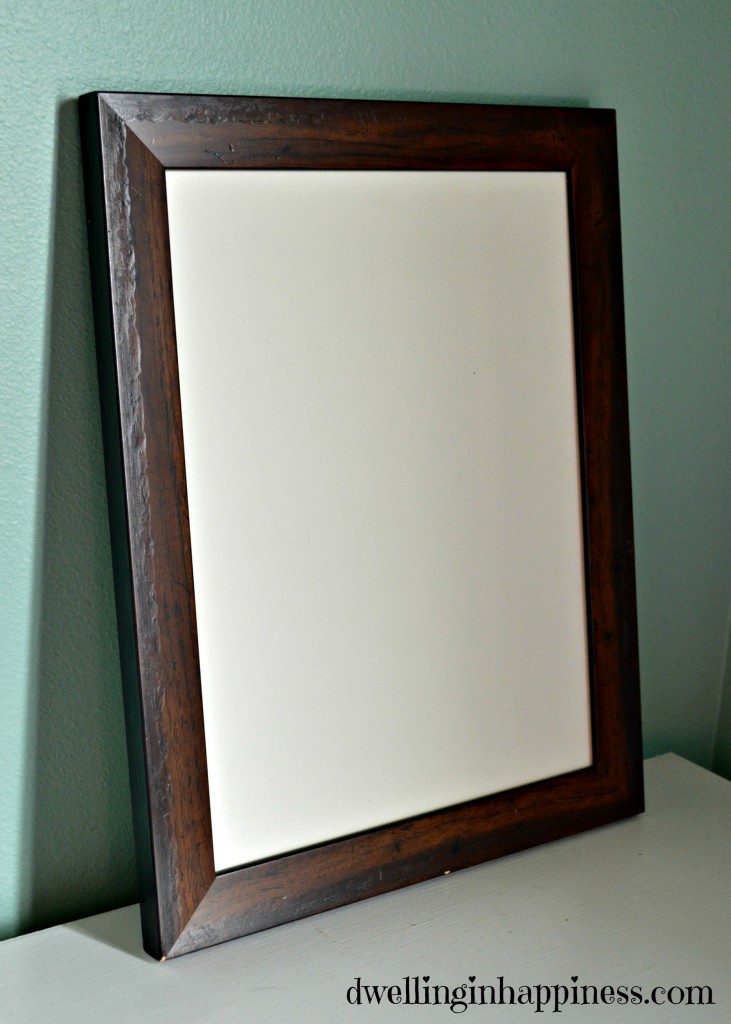 I started out with a thrift store frame. I wanted to try out a new chalk paint I saw at Joann‘s, so I bought the Folk Art chalk paint in White Adirondack. They have a TON of gorgeous colors, I might have to try more later! 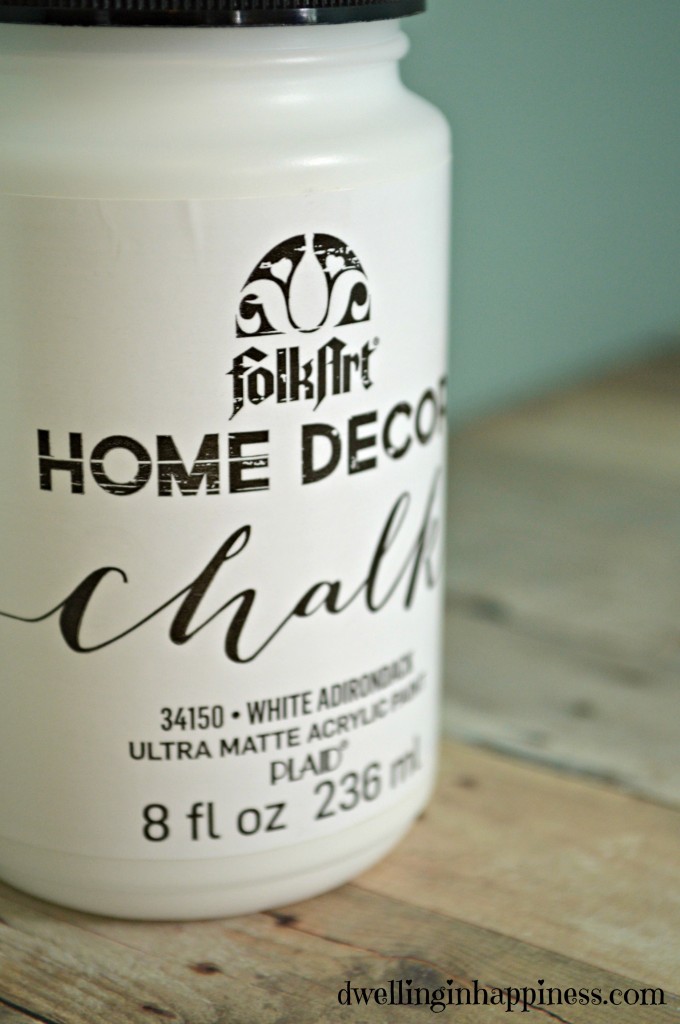 I sanded the frame a little, even though the directions said I didn’t need to. They’re probably right, but the frame had some weird spots where there were bumps. I brushed on two coats of the chalk paint, letting it dry in between. The paint went on super smoothly, and covered the frame beautifully. It was super easy to clean out the brush, too! The paint came right off. 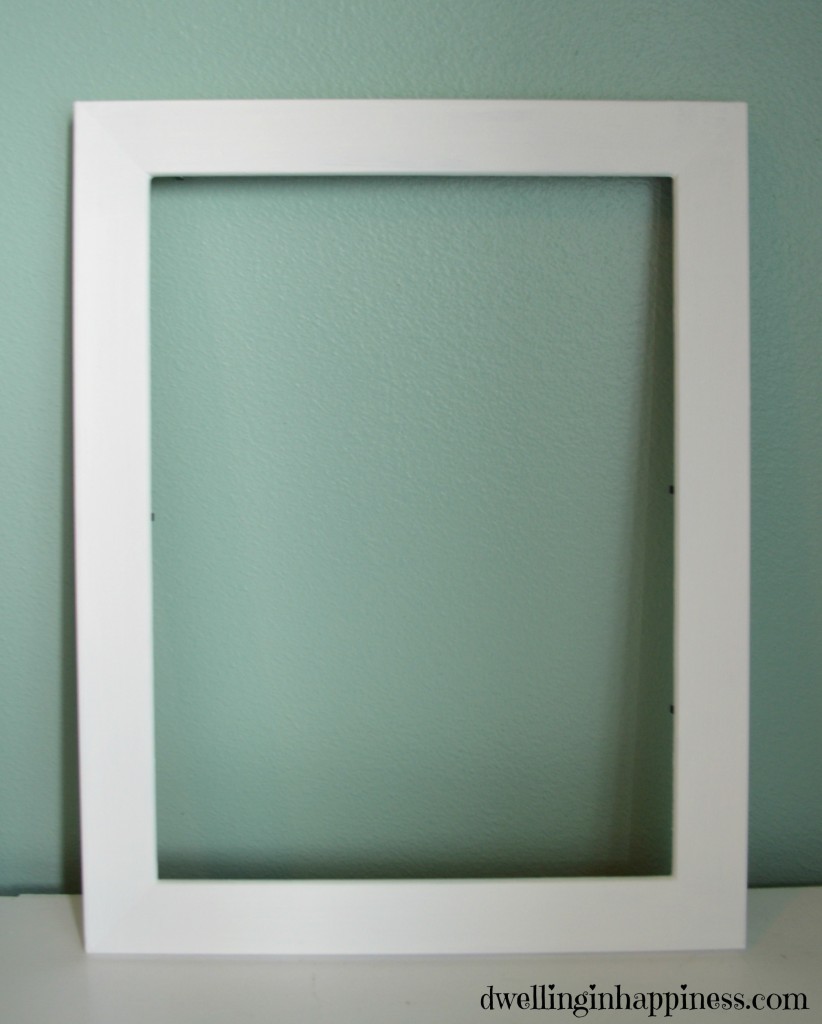 After it was totally dry, I distressed the frame a little by rubbing sand paper along the edges. The sanding left behind a pretty dark blue/gray color which was absolutely perfect! I didn’t have to sand very much to achieve the look, either. I’d totally recommend using the Folk Art Chalk paint! (and they aren’t paying me to say that!) 🙂

I had found some fabric in the scrap bin at Joann’s as well for $.83, and cut it to fit the frame. I hot glued the fabric down in the back. Our bathroom is beachy/nautical themed, so I wanted a pretty blue fabric. I had bought a few different fabrics, but unfortunately they were too dark and patterned, not letting the black marker show through on the glass. 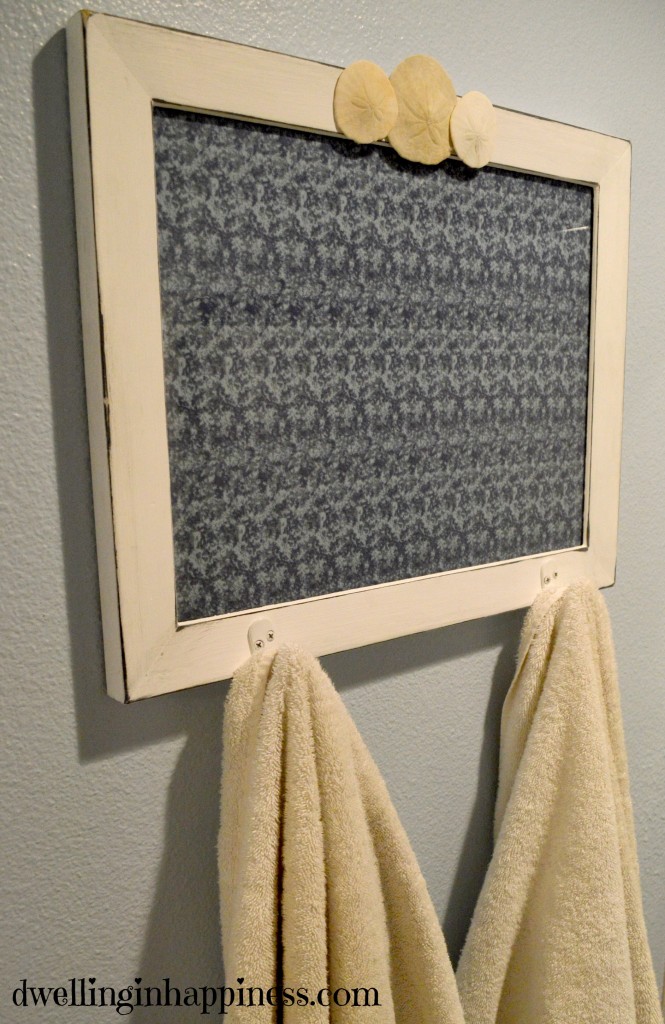 David then screwed in a couple of robe hooks from Target, and boom! Instant whiteboard towel rack. Not only can you write down your thoughts from the shower, but you can also leave cute little love notes to your spouse as well for them to read! I hung this on the wall next to the shower, so I could easily just grab my towel without having to get out and drip everywhere! 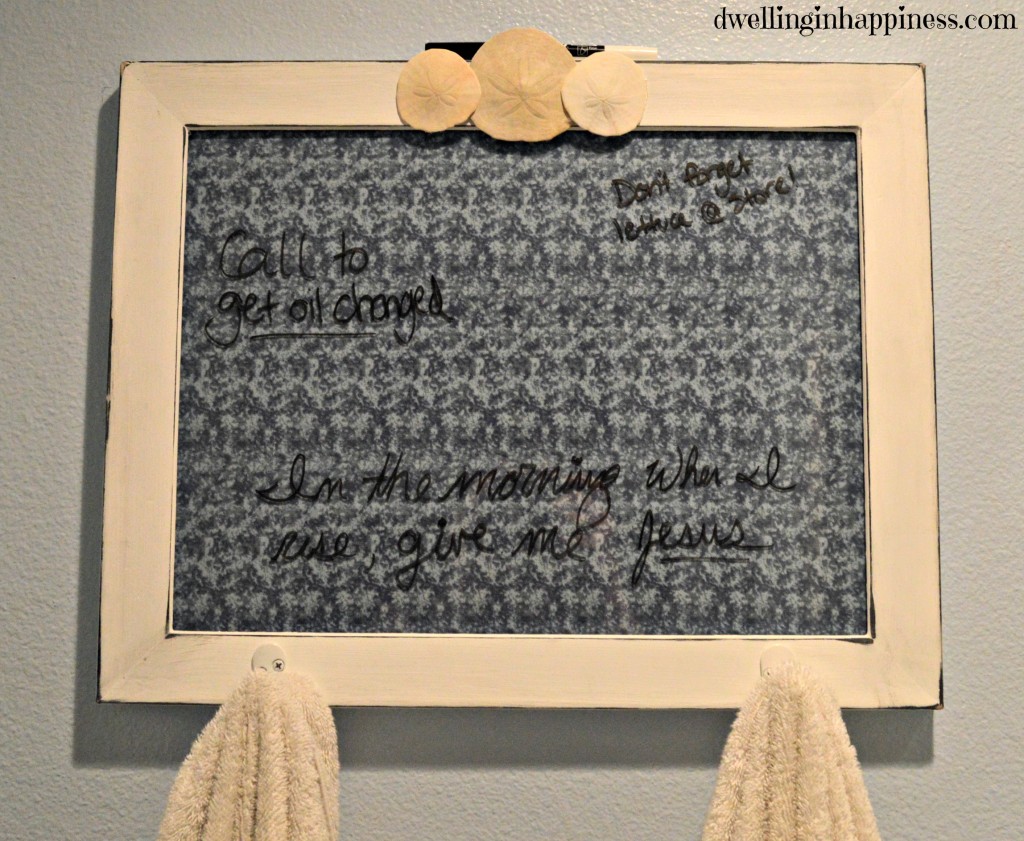 So, the fabric reminds of those Magic Eye books we had as kids, but oh well. It also has a ocean wave/beachy feel to it, too! 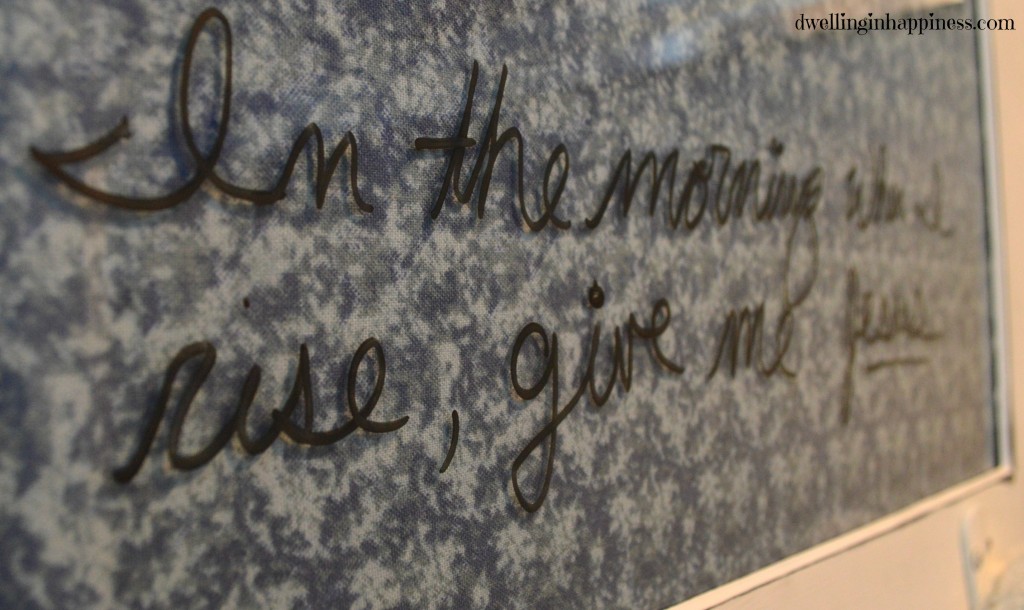 I wasn’t sure about how to attach the dry erase pen (because if I didn’t, it’d be gone forever and we’d never actually use the thing!). I finally decided to add a few sand dollars I had collected at the beach a few years ago to the top, which also holds the pen if we place it on top from rolling off. Sooo much better than David’s idea, you guys. He said what every male says to use to attach something: duct tape. Uh, no. 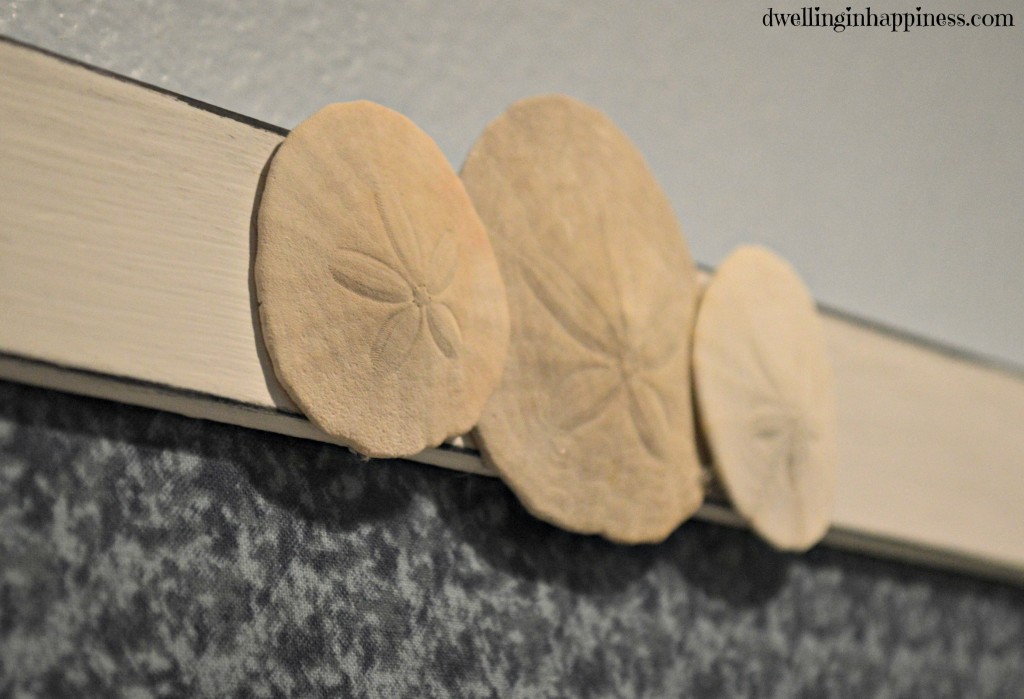 I love how functional this will be right next to the shower. Folk Art also makes a wax sealer, and I’d recommend that as well. Since the frame is wood and it’s next to the shower, it’s going to be in a lot of steam, and you want to make sure your paint job stays pretty!

Have a great weekend, friends!

Where do you do your best thinking?

Do not hate a fellow Israelite in your heart. Rebuke your neighbor frankly so you will not share in their guilt. Do not seek revenge or bear a grudge against anyone among your people, but love your neighbor as yourself. I am the Lord.
Leviticus 19:17-18
DailyVerses.net